I've been rather irrationally excited by Tim Hortons since I returned to Scotland, and have been into their City Centre store several times when passing.  I'm quite excited to see that they've now opened a store in East Kilbride, and basically just a stone's throw from where I live, even.

On the one hand, they are essentially just another big coffee chain, on a similar par to Costa, Starbucks and the like.  But in a cafe culture dominated by big chains (East Kilbride does need more independent cafes), it's still exciting to get offered something just a little bit different.  Tim Hortons has its roots in Canada, where it is as ubiquitous as Starbucks would be in the USA, but otherwise they offer a fairly similar product range, although with more of an emphasis on doughnuts as well.

I have to say, mostly I keep going back for these: 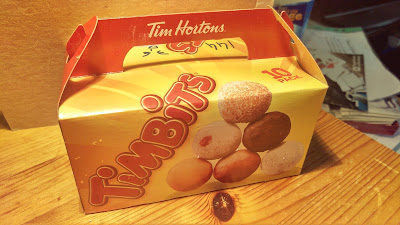 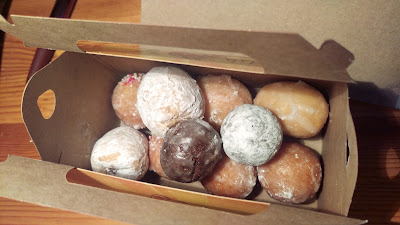 Timbits are little mini doughnuts that come in a variety of flavours (the 'birthday cake' variety is my favourite) and you can either buy them individually or in little selection boxes that give you a mixture of all of them.  This is a terrible thing for my weight loss ambitions for this year...

Opening times and other info is all available here.
Posted by Kristofer Keane at 16:39